Fire on the mountain: A day in the life of an Apolojedi

This morning I woke up to the sound of fire crackling outside my bedroom window. As my wife noted, "That's a little disconcerting." A brush fire that had been burning up the mountain all night had reached the block walls of the World Gospel Outreach training center where I was staying. The gorgeous view I posted yesterday now looked like this: 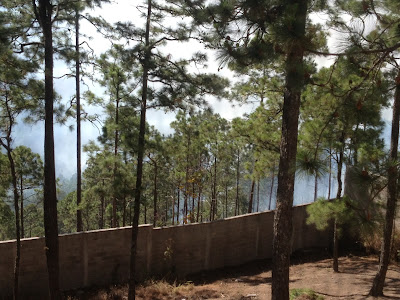 Gone was the amazing view of the city and in its place was dense, billowing smoke. Well the wall is high and solid, so I went down to have breakfast on the terrace. No one was around and no one seemed concerned so with a perfect cup of mocha coffee in hand I walked out to louder crackling and snapping and flames that were now blazing several meters above the ten foot wall.  So, out came the iPhone and I shot this:


It was a bit unsettling to have flames now inside the compound and no one else around, so I stopped filming and went to find someone - totally unsuccessfully. So after several minutes of looking around and calling out, I went back to the terrance and was relieved to find a WGO staff member with a hose putting out the fire. It was obvious the holes to let water drain out were just as good at letting fire in, so Arturo had me bring him another length of hose, which he connected and asked me to find a ladder.  I scouted around the compound and in a few minutes found an 8' step ladder and brought it to where he was now standing on the wall.  However, the fire was still moving up the hill so Arturo had me climb the ladder so I could help him hang drop the 15' down so he could start fighting the fire further down the hill. By this time other people had joined the fray and the wind was picking up and shifting toward the training center again when I shot this.


The rest of the morning consisted of more and more staff members and neighbors joining in to fight an ever-growing brush fire, with many of us moving outside the walls of the compound to rake, spray, shovel and untangle a long rope and attach it to a tree so people could more easily get up and down the steep hill.  Like I said in the video clip, it figures the morning I wear my dress pants and flip flops to breakfast instead of my traditional jeans and tennis shoes is the morning we have a brush fire. 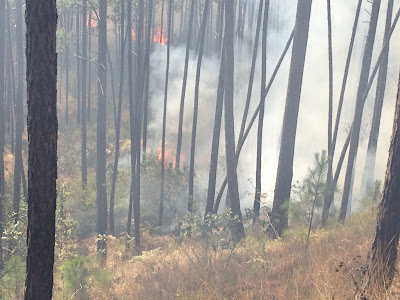 For a while it looked like the men were going to contain the fire at the bottom of the hill, but the wind picked up and shifted back toward the compound requiring everyone to make a hasty retreat up the hill (and being very grateful for the rope we took 20 minutes to untangle and run down the side of the mountain). 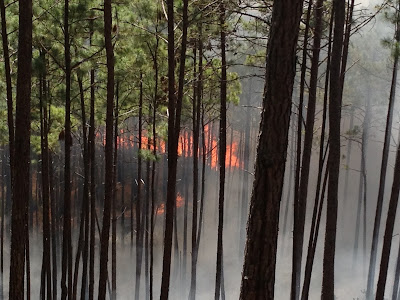 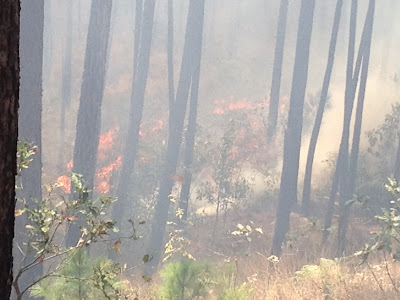 The good news is that even thought the fire burned right up to the wall again, it did not come through and then the wind again shifted away from us. 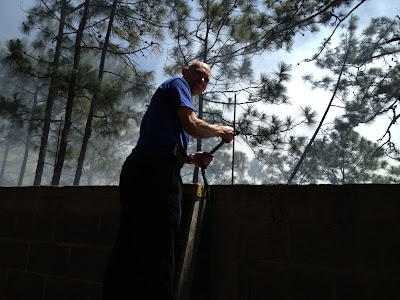 Periodically the wind would pick back up and fan the smoldering piles of brush into flames so I took a turn on the ladder spraying the small spurts of flame that would suddenly appear by the wall.


By lunch time it was pretty well contained and I was getting picked up to go take the tour of the LDS temple in less than 30 minutes. One of the staff members said I had my Ash Wednesday cross on my forehead, so I decided I'd better go clean the soot of my face and head before changing into a clean pair of pants - the ones I'd been wearing all morning were pretty trashed.

But more about that tomorrow...

I know I won't be waking up to the sound of crackling flames tomorrow morning - God has blessed us with a steady rain through most of the evening and night so far.  A most welcome sound indeed.
Posted by Joel B Groat at 12:17 AM

Wow! The things you get to do "for the Lord." Praying for the flame of truth to get through. . . and the fire flames to stay out.

Yes - thanks for the prayers. We had rain all last night and most of today so the fire threat is over for now. Christians in this area are calling this very rare cold front with its steady rain a miracle and specific answer to the prayers of so many who knew about this situation.

While most blackjack actual cash apps can be found for each iOS and Android, some apps are higher suited for one working system over the other. IPhones have stunning graphics, so blackjack apps that can benefit of|benefit from|reap the benefits of} would possibly be} finest suited for iOS devices. The cell integration is smooth and follows the usual have the ability to|you presumably can} count on from any casino today. So regardless of what system you decide to play on, your cell experience will be an excellent one. That being mentioned, using a blackjack 솔카지노 app on any cell system is all the time extra vulnerable to lag than if you chose to play on a desktop. So have a quick glance at your status bar before leaping into a reside casino on your app, because of|as a end result of} playing in} online calls for fairly a bit of bandwidth.